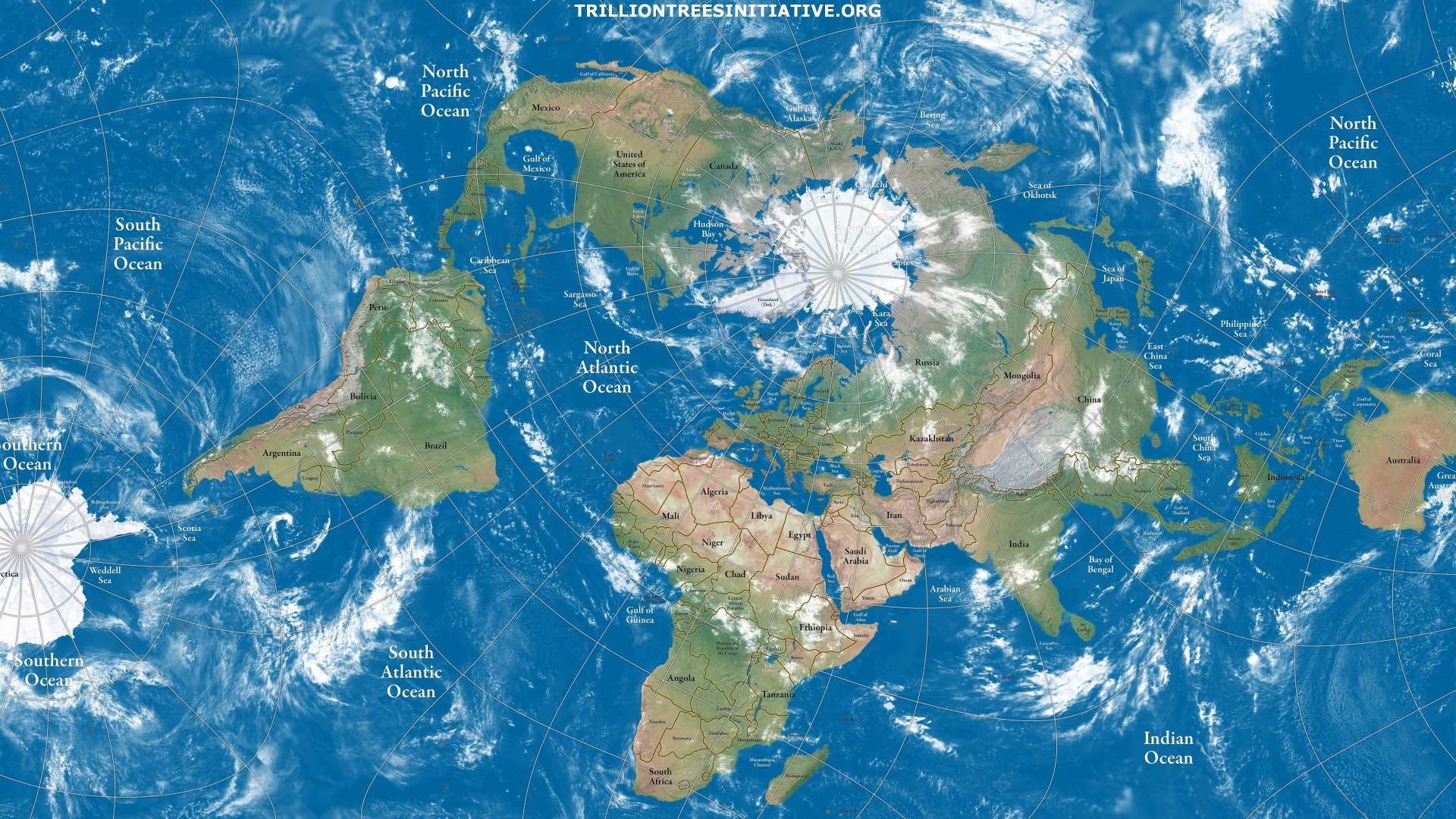 This is an announcement of the new Greening Deserts project for critically endangered species: 1001+ Critically Endangered Tree Species Seed Storage and Tree Cultivation Project. The Trillion Trees Initiative can, in future, help to share trees and seeds worldwide, especially to regions where an increased biodiversity is needed or to rejuvenate populations where trees have become extinct or very rare.

Some of the other Greening Deserts projects can also help to establish populations of endangered tree species upon which many other species depend. These projects in biodiversity conservation, ecosystem restoration, environmental greening, reforestation and species protection can save millions of life forms worldwide. Healthy ecosystems like forests, of course, provide habitat for countless organisms and their protection or restoration can save many endangered insects, fungi and microbes as well as mammals, amphibians and birds. Therefore, Greening Deserts projects for species conservation and species protection will focus on biodiversity in forests, drylands, grasslands, and wetlands. In urban areas, we will support biodiversity in cities by research, followed by greening and species protection camps.

Greening Deserts’ Critically Endangered Species Research and Protection Program (CES-RPP) started this additional project for endangered tree species in order to focus on the most important issue of global biodiversity conservation by establishing more biodiversity habitats and near-natural forests worldwide. Doing so will also have positive repercussions on many other ecosystems, including stabilizing the atmosphere and weather systems. This will better balance the global climate, biosphere, and water cycles. Different soils, terrains and weather conditions are important factors for tree planting, especially in terms of annual rainfall, groundwater and soil water. The role that trees and soils play for the air and water quality, life forms and soil building should be clear to everyone – especially for those who are affected by global crises. People should think more about microorganisms, minerals, soil quality and important differences of living or dead soils – and the different waters in this relation. The main focus of the new species protection project is on critically endangered tree species which involves the building of special seed storage facilities and other innovative solutions. Greening Deserts sustainable projects aim to improve developments in various areas – such as solar cooling, distribution, logistics, preservation and storage. The sharing of experiences in these areas will be particularly important. Therefore, working with the Urban Greening Camp, we can preserve, store and share seeds professionally. We will offer much more products and services in future. Engaging primarily in the field of Indoor Gardening and Vertical Farming, we can cultivate many species of trees, especially for the European and Mediterranean area. We can share seeds and plants with botanical gardens and professional nurseries around the world. Many international institutions, organizations, universities, biodiversity and plant scientists, and forestry specialists have already been informed about many of the projects in 2020.

Species conservationists, tree experts, botanists, tree growers, tree specialists, and all friends of nature are invited to join. Anyone who can exchange useful information or share constructive feedback and resources would be greatly appreciated. Of course, all experts and scientists who can assist the project through specialist knowledge or on the ground support can also join. Together with the CES-RPP, we can set a goal to recultivate and replant forests with typical plants and native tree species. More biodiversity in wild grasslands, mixed forests and wetlands by integration of missing species should be the main goal of environmental, nature and species conservation organizations. It means also to establish more landscapes and regions which have critically endangered tree species and key plant species worldwide. If we focus on cultivating and exchanging seeds and seedlings worldwide, we can save many tree species from extinction. If all goes well, we can lift the critically endangered status of many trees by cultivating plants and sharing their seeds. Other important tasks for the project are to share natural alternatives to pesticides to farmers and to promote nature-based solutions and permaculture.

Botanical gardens, nurseries, tree experts, forestry companies and tree-related businesses should pay more attention to these factors. One major cause of biodiversity loss and mass mortality is deforestation and the monocultures which replace vibrant ecosystems. It is not only about the few established tree species in forestry but also many other important plants and keystone species. Through the endangered tree species that we want to cultivate and share worldwide, thousands of other species can be saved and protected. The trees and plants may even bring back species which are thought to be extinct. Biodiversity forests, meadows and fields are all key to counteracting global species extinction. Many of the critically endangered tree species play a particularly important role. On the project pages of Greening Deserts and affiliated projects, you can read more about the real problems and positive solutions in various world regions and this includes information regarding how to live efficiently and sustainably.

GIS, including satellite imagery of global vegetation, can help select the right trees for the right places. Historical archives and plant databases can be used to find suitable tree species for the regions with low biodiversity, like in Europe and North Africa, where few tree species currently live, maybe through having been lost, or even forgotten – especially in relation to the approximately 60,000 tree species currently surviving, of which about 10,000 are endangered and 1400 are critically endangered. This is why Greening Deserts has set the goal of saving the most endangered tree species. Of course, we will work together with interested species protection organizations, tree nurseries, botanical gardens and institutions to do so.

It is not only about biodiversity hotspots, creating new forests and adding a few more tree species, but also many other plants, animals and ecosystems that used to have a greater biodiversity. Therefore, increasing the biodiversity of cities and urban regions is more important than many people think. Ecosystem and landscape experts can find suitable places for greening and reforestation or even for entirely new forests, such as within man-made deserts or urban concrete jungles. Urban greening and urban forests will play an increasingly important role, especially in relation to the issues of biodiversity, global greening, health, and urban heat mitigation.

Some cities are now already up to four degrees hotter than in previous years; the 1.5ºC or 2ºC target has long been exceeded in some regions. Many people are already dying as a result of the droughts, heat waves, floods and wildfires of recent years. The less direct effects of the climate crisis, such as environmental or natural disasters and pandemics, are underestimated, especially regarding poverty. Experts estimate that over 100 million people will fall into poverty as a direct consequence of the climate crisis. We increasingly need holistic solutions to the climate crisis and global solidarity with these poor, sick and otherwise vulnerable people. Healthy ecosystems and a healthy environment are the basis for the health of all life forms. Adapting to climate change and strengthening cultures is important and, only working together with nature, can we overcome the crises. Nature-based solutions play an increasingly important role. One can see the Corona crisis as part of the climate crisis, especially since the virus originated in a damaged or polluted environment in China. The chance of zoonotic viruses being transmitted between animals and humans becomes higher in damaged ecosystems. Healthy ecosystems and life forms can better prevent and regulate diseases.

Species recovery and conservation through species protection camps and special species protection programs like the Trillion Trees Initiative can reduce global species extinction with appropriate international support. The camps primarily serve to restore near-natural ecosystems. The global greening process can accelerate the peace-building process and reduce harmful climate change effects like global warming and air pollution. Environmental awareness, ethical and social principles, sustainable production and working, Human Rights and Indigenous Rights are all integral to future developments. For years, we have been informing organizations and institutions about Greening Deserts projects and their developments.

The global extinction of species, lack of biodiversity and species protection or limited species rescue in many areas all increasingly affect human health. The current crisis, heavy floods, storms and the recent drought years have clearly shown how quickly ecosystems can become unbalanced or even fully collapse. The important role of missing tree species, especially in tree-poor regions of Europe, including the Mediterranean, is greatly underestimated. Several hundred other species can depend on each individual tree, after all. Since many thousand tree species are critically endangered and only rarely present, hundreds of thousands of species which depend on these trees are missing. This exacerbates the great species extinction. Trees fulfill important functions within ecosystems and nutrient cycles. Climate and weather systems are also significantly influenced and stabilized by forests.

Unfortunately, one still hears many limited arguments within agriculture and forestry, where people are not looking at the problem holistically. Agroforestry, food forests, flowering trees and orchards with fruit available for animals and humans alike can be combined with more sustainable agriculture and ecological forestry! AI, aquaponics, cleantech, hydroponics, green tech, permaculture techniques and vertical farming, advanced scientific developments or achievements can help to improve all these sectors. Many of the conflicts and controversial discussions are unnecessary, especially those regarding land use. A lot of things are possible simultaneously if one is creative, willing to compromise and fully understand the issues. Often, there is simply a lack of awareness and willpower. If all nations plant a few billion trees during the coming years, we could easily reach the goal of a trillion more trees for planet Earth. If most of the humans currently alive plant a few hundred trees in their lifetime, humanity could plant another trillion trees within just one generation – a manageable goal if only all humans would act together. Meanwhile, we will push the trillion trees initiative forward with good actions, examples and projects. Many people and organizations have been informed about Greening Deserts sustainable developments, innovative ideas, and outstanding projects.